As I mentioned on Monday, after a lot of searching, I found my master copy of The Grimoire #1 and #2. The Grimoire: A Magazine of Science Fiction and Fantasy Gaming was my attempt at a gaming fanzine in the late 1970s. I produced 3 issues with a manual typewriter and rubber cement to paste in artwork — primitive by today’s standards, but fairly normal for the 1970s. The first issue was the Spring 1978 issue. Over a year passed before the second issue came out. A number of things changed over that year. I had decided to turn my Empire of Arn campaign into a complete set of variant D&D rules and was bitten by the “complexity bug” in the process. Fortunately, I got over both, but this issue reflects what was going on at the time. 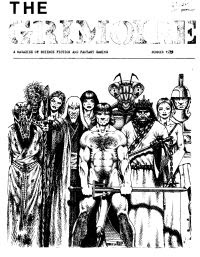 I wish I’d saved Denis’ experience record sheets as they often included some fine doodles. Of course, I didn’t think of it at the time, so they when into the trash with all the others after experience was figured for the seesion.

“BTW, I’m working on scanning in both issues so those who would like copies will be able to get them as pdfs”