While most Wee Warriors products were for D&D, Dragonlord was a fantasy board game written and illustrated by Morno. It was jointly published by Cosmic Frog and Wee Warriors in 1977. It came with nicely illustrated rules (6 sheets, printed on both sides), a board on six various sheets of legal-sized thin card stock that you had to cut the edges off to fit together and counters that needed to be pasted on cardboard and cut apart.

This was a two player game. Players were warriors mounted on dragons fighting other warriors mounted on their dragons. There are four scenario: 1) single combat; 2) village raid; 3) one team of dragons/riders versus another; and 4) Ragnarok — the battle to end all battles with all the dragons. It looks like fun, but I never played it. No one in my group at the time was really interested. I mounted the counters to cardboard with rubber cement but never cut them apart. So I never even played the game solitaire. I honestly don’t know why as the game looks like fun and the rules are very simple compared to the SPI and Avalon Hill boardgames I was buying and playing at the time.

Glen Williams reviewed the game in Dragon #17. Here are some of his comments on the game:

The artwork is outstanding. It is equalled only by the rule book illustrations in Red Moon, White Bear and Nomad Gods. The pictures convey the swirling blur of scales, claws and flame that I have imagined would be the nature of dragon combat. Unfortunately the excellent artwork is applied inappropriately on the map. The map is drawn from perspective so that hills and cliffs are seen from the side rather than from on top. While aesthetically pleasing, that technique has mechanical drawbacks which affect play. Where are those slopes and cliffs supposed to be? If you are diving onto a low flying opponent, that ambiguity can create bitter feuds over whether or not you have clutched your opponent or plowed into a rocky slope. In the middle of the board is a very nice picture of a ruined castle, but because it is drawn from the side, the castle would have to lean at a forty-five degree angle to occupy the space it fills on the map!

The map is archaic in terms of game technology. At the price, some cut and paste is permissible. Each section of the map, printed on construction paper-like material, has to be trimmed and taped to its fellows. Unfortunately, the map sections do not align properly, creating a strange jog when your dragon flies across a taped edge. Further, the map grid is a set of Cartesian squares which regulate movement and combat. Thus, each diagonal move counts as 1.5 squares. That may leave a half movement factor lost simply due to the grid. An old time gamer remembers why the hobby almost universally adopted the hex grid system. Sometimes there are good reasons for such a system; for example, the tactical display boards in Battlefleet Mars are based on Cartesian co-ordinates because of the Newtonian movement. This game has no such compelling reason. Since SPI gave the hobby permission to use their numbered hex grid system so long as they received credit, why settle for an inferior system that distorts the game? The mechanics of the game are also complicated. A dragon has five separate attributes: maximum speed, dexterity, strength, endurance and maximum damage they can absorb: Riders have two characteristics: strength and maximum damage. They also have the option of wielding one of three weapons, all of which can be carried aloft simultaneously. Each weapon varies in the damage it may inflict, the number of times it may strike per combat round, and the directions in which it may be used. The lance may strike only in a forward direction, a sword forward and to the sides and side rear squares, while an axe may be used in any direction.

Speed, altitude and damage taken require separate tallies for each beast plus damage taken by his rider. Since there is a scenario using twelve dragons and riders per side, the player may have to monitor up to 84 individual factors (dragon speed, altitude, endurance, strength, damage taken, rider strength and endurance). Under these circumstances, bookkeeping is more important than fun.

Here’s a picture of my copy: 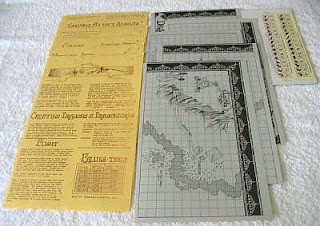 Justin: Interesting class. I'll have to actually read your post, rather than skim it as I just did, but from skimming it looks like a nice conversion of 1e psionics to a psionicist class.

I did a psionic class, based on the 1e foundations. I conceived it as a character developing psionic strength points, as well as disciplines over time.