Most old school gamers are probably familiar with TSR’s Dungeon Geomorphs. Fewer have probably seen these Geomorphic Mini Dungeon Modules published by Fantasy Art Enterprises in 1979. While these geomorphs are smaller than those from TSR, they can be used to create much more interesting dungeons. This is because most of the geomorphs are “three-dimensional.” That is, they have passages that go over or under other areas on the geomorph. So characters in a dungeon mapped with these geomorphs can’t easily tell whether they are on the same level as they can in a dungeon without such features.

There were 52 geomorphic modules in Geomorphic Mini Dungeon Modules, on five sheets of cardstock. Like the geomorphs from TSR, you had to cut them apart yourself. The set I have is uncut. I believe this is because I did not buy this product myself. One of my players probably did and left it at my house. He never reclaimed it and it was eventually buried in a pile of papers and forgotten. I know if I’d bought these nifty geomorphs, I have been using them. They seem like they would be much more useful than TSR’s, at least for the type of dungeons I like.

As I seem to lack the collector’s gene, I find it hard to believe that these five sheets of cardstock are apparently fairly valuable on the collector’s market, but I’ve been told they are. Erol Otus was one of the primary people involved in Fantasy Art Enterprises and may have actually done these geomorphs before he took a job with TSR — that alone will make them worth something to many collectors I guess.

As my scanner is refusing to cooperate with Windows 7 at all today, I can’t include a scan of one of the sheets. Instead here is a picture I took of all five sheets. Sorry that it’s not better. 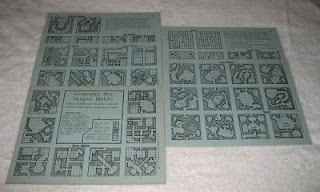 Fortunately, Allan Grohe (Grodog) has a picture of all 52 of the geomorphs in use over at his Greyhawk Online website here. BTW, I’d like to thank Allan for helping me identify these. The “cover sheet” with the product name was stuck in another pile of papers when I first found these, so intially all I saw was a bunch of small dungeon geomorphs I did not recognize.

You're quite welcome, Randall.

It looks like each mini dungeon was 11 x 11 squares?