Palace of the Vampire Queen was the first professionally published standalone adventure module for D&D. Written by Pete and Judy Kerestan, it was published by Wee Warriors in 1976. It was even distributed by TSR for a brief time. While the product would be considered an amateur production today, in the early days of D&D, it was professional. It wasn’t published as an adventure or a module — those terms had not been “invented” yet. Instead it was called “Dungeon Master Kit – Number One. 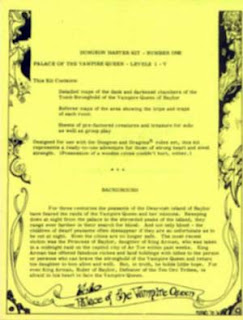 And here is my transcription of the module description from top of the cover page:

PALACE OF THE VAMPIRE QUEEN – LEVELS I -V

Designed for use with the Dungeons and Dragons rules set, this kit represents a ready-to-use adventure for those of strong heart and steel strength. (Possession of a wooden cross couldn’t hurt, either.)

The bottom of the page is the start of the module background. It really makes the module sound very exciting.

For three centuries the peasants of the Dwarvish island of Baylor have feared the raids of the Vampire Queen and her minions. Sweeping down at night from the palace in the shrowded peaks of the island, they range ever farther in their search for blood. And not only blood — the children of dwarf peasants often dissappear if they are so unfortunate as to be out at night. Even the cities are no longer safe. The most recent victim was the Princess of Baylor, daughter of King Arman, who was taken in a midnight raid on the capital city of Ar Toe within past weeks. King Arman has offered fabulous riches and land holdings with titles to the person or persons who can brave the stronghold of the Vampire Queen and return his daughter to him alive and well. But, in truth, he holds little hope. For even King Arman, Ruler of Baylor, Defeater of the Ten Orc Tribes, is afraid in his heart to face the Vampire Queen.

The background goes on (on another page) to tell how the vampire queen has shipwrecked on the island long ago and how the palace in the mountains is rumored to be full of treasure. Naturally the poor people of the island are awaiting a group of heroes to end the reign of terror. It’s a great setup for an adventure.

There are ten pages of maps of the dungeon (the Palace). Here’s a reduced copy of level one. 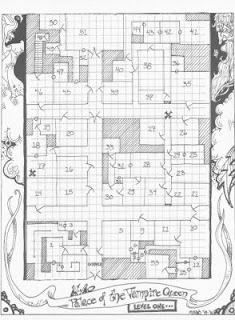 There are five double-sided pages of room descriptions. These are very brief. The DM is told: “Feel free to use your imagination for dialogue or any extra details you feel would add to more exciting play. The kit itself is only a basic outline – you can make it a dramatic adventure.” And every word of that is true. Here is the dungeon key for the first five rooms of the first level. It’s presented a a four column table: Room, Creatures Encountered, Max Damage, Contents of Room.

While not all encounters are this straightforward (e.g. the Madman and his ten attack house cats in room 18), most are. If you are used to modern adventures, this seems pretty sketchy. It is pretty sketchy. However, it was an example of a dungeon — something that was very exciting back in 1976 when the only other complete dungeon available was The Temple of the Frog in the Blackmoor supplement. It was also quite playable. DMs were used to having to create everything from scratch. This “Dungeon Master Kit” did most of the boring stuff – drawing the maps and populating them with monsters. It left the exciting stuff, turning those maps and keys into an adventure to the DM. While there was a “plot” (try to rescue the princess and free the island from the terror of the vampire queen and her evil, it was just background. If the DM did not want to use it, he could drop the Palace of the Vampire Queen into his world and create his own background for it without requiring any major changes to the module. I placed it in the Majestic Mountains north of the City-State in one of my early campaigns.

If you are interested in all the variations between the editions of the Palace of the Vampire Queen, you will find this information on the Dungeon Masters Kits page at The Acaeum. According to this information, my copy is a second edition. I’d like to apologize for the image quality in this post. My 4 year old scanner and 64-bit Windows 7 do not get along very well. Any typos in the quoted material are probably mine, the original is relatively free of typos.