↓
Home » Ancient Posts » Notes on FEZ I: Valley of Trees

FEZ I: Valley of Trees was the first of the FEZ modules published by Mayfair Games in their Role-Aids line of adventure modules — which were labeled as suitable for use with AD&D. The latter got TSR’s lawyers in a twist and caused an eventual lawsuit which, as I recall, TSR effectively lost. This module was published in 1982. The FEZ modules, like many early D&D modules, were convention tournament modules converted to a product for all. Unfortunately tournament modules gave a very strange view of what D&D was all about as they were basically designed to kill characters with some variation on whoever made it furtherest into the dungeon before dying is the winner. Sometimes other goals disguised this, but “go far in limited time without dying” was the major design strategy.

FEZ I: Valley of Trees was written by Len Bland & James Robert and is a classic tournament module. Here’s the entire description of the module from the back cover:

The wizard, Fez, has staked his life that you can out-reason deadly puzzles and outwit (or outrun) exotic monsters. A Quest to truly test all your dungeoning skills.

In 1987, this module was redesigned and reissued as FEZ I: Wizard’s Vale to better fit with the storyline developed in the later FEZ modules. This first edition, however, is pure tournament module with little concession to the needs of a normal campaign, let alone a story.

The FEZ modules were quite popular and sold well for Mayfair. Unfortunately, they did not do much for me of my groups of players. By the time FEZ I was released we had grown very tired of the “tournament dungeon” style. The style was fine for tournaments, but without a lot of work, they did not do so well as part of a regular campaign.

My copy of FEZ I is complete with the cover folder, 40 page modules, and a light cardstock Mayfair promotional insert. Here’s a picture: 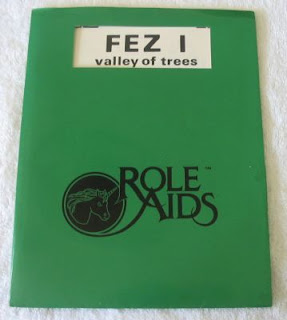 There are some better pictures of a generic copy over on Boardgamegeek.

I was always a fan of the cover art of Fez III ("Angry Wizard") but wasn't able to get a copy until just recently. Haven't had a chance to run it yet.