The Dwarven Glory was one of the earliest professionally published standalone adventure module for D&D. Written by Pete and Judy Kerestan, it was published by Wee Warriors in 1977. The first edition was distributed by TSR for a brief time. While the product would be considered an amateur production today, in the early days of D&D, it was professional. It wasn’t published as an adventure or a module — those terms had not been “invented” yet. Instead it was called “Dungeon Master’s Kit #2”. It is, however, a much better product than Palace of the Vampire Queen, at least in some ways. 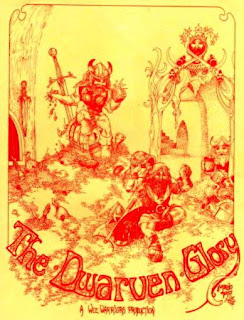 And here is my transcription of the module description:

FROM THOSE WONDERFUL FOLKS WHO BROUGHT YOU

PALACE OF THE VAMPIRE QUEEN

A presentation of the semi-abandoned dwarven caverns in the mountain chain on the island of Baylor.

Maps may be arranged in any order wished, giving a geomorphic playing area with up to 60 variations.

Fun things in the kit are:

The module background given doesn’t make this adventure sound quite as exciting as Palace of the Vampire Princess, at least to me. (But then I’ve never liked dwarves.)

At one time the community of Dwarven Glory was a thriving and wealthy community. So wealthy, in fact, the the pround and strengthening heritage of Dwarf history was forgotten and the community was easy prey for Mortoc and his 10 Orc Tribes. But, although the Orcs conquered, they could not completely destroy Dwarven Glory, and there were parts of the caverns they did not even penetrate.

Now the caverns echo in the misty gloom, offering refuge to the forgotten and promise to the adventurer.

While the Dwarven community is broken, some dwarves still live in The Dwarven Glory and do many other creatures. There are four sheets of maps of the dungeon, six sheets of room descriptions keyed to the maps, a quick reference/creature encounter page, and a front and rear cover.

Dwarven Delite Ale House. 2 tables, 4 chairs, one bar, one chest (poison pin lock) 300 GP in chest. Female barmaid (14th level magicuser)(HP-41)(AC-7) wears hypnotic medalion (only works for her) that charms male party members to fight each other in jealous rage over her. She will instill in any female party members a feeling of insecurity and inferiority. No saving throw against medalion effects – works within sight. Magic user is neutral/evil.

As you can see, the room descriptions are much more complex than those in Palace of the Vampire Queen. I selected this room because it shows a major problem I have always had with The Dwarven Glory, the monsters were sometimes very powerful but because of the geomorphic nature of the dungeon “level” was fairly meaningless. This meant that players really had no way of knowing that they might be walking from a room that low level characters could handle to one that even fairly high level characters might have trouble with. To me, this is poor old school dungeon design. If you get the impression that I really don’t like The Dwarven Glory, you would be correct. It just doesn’t do anything for me.

My copy is a first edition as later editions had at least the room descriptions in a digest-sized booklet. If you are interested in all the variations between the editions of The Dwarven Glory, you will find this information on the Dungeon Masters Kits page at The Acaeum. I had hoped to include some more pictures of this relatively rare module, but our digital camera is loaned out and Windows 7 refused to talk to my scanner after I finally got a good cover scan.