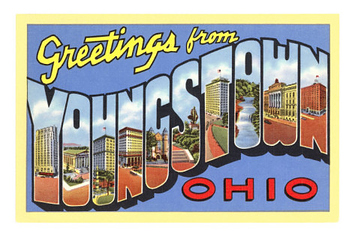 I suspect (okay, I hope) that at least a few people are wondering where I’ve been the past four and a half months. I’ve been busy selling our house in Garland, TX and moving to Youngstown, OH. My wife’s MS had reached the point where the high heat combined with the high humidity in North Central Texas was making her life unbearable. And there was no way we could afford the energy bills that would have resulted from keeping the house comfortable for her during our 8-9 month long “summers” (“summer” being when we would need the AC running to have any chance of keeping her comfortable). The real estate market in Garland was hot so we decided (pretty suddenly) to sell the house and move somewhere with a better climate for her needs, a lower cost of living, and saner politicians. We finally decided on Ohio. Winters will be awful but the rest of the year is bunch better for her. The cost of living in the Youngstown area is also much lower than in Garland.

We finally found a house here and sold our Garland house in late June. Movers arrived in late August, packed us up and arrived with our stuff on August 31. We drove up here over 5 days. Taking it slowly as long car rides are hard on my wife. The trip up was much easier than expected. Other than having to stay in Motel 6 because they are pet friendly, the trip up was actually enjoyable. We are currently in the midst of unpacking (and finally have Internet). It will be a few more weeks before regular posting — and work on Microlite75 projects — will resume. I hope to start a old school RPG up here late this year, so if you are in the Youngstown area and are interested in playing in a old school campaign, let me know. I have a long bar area in the basement that I plan to use for gaming so I will be able to accommodate a fair number of players.

mikemonaco: We are slowly settling in. Getting the house modified for Donna's disabilities has taken a lot longer than we had hoped, but everything is finally coming together. I'm hoping that I will be able to actually find time for games — both designing and playing — by the start of 2017.

Welcome to Ohio! Hope you and your wife are settling in ok!

There's always Origins in Columbus, too.

Wow…just in time for football season! Bengals or Browns?
; )

Hope the settling in goes smoothly for you and the wife.

Welcome to Ohio! (I'm south of you in Mansfield.) Lots of gaming in the state, with Con on the Cob happening in October in your backyard. U-con in Michigan is probably a 2 hour drive away, and other cons (Gen Con, Gary Con, GameHoleCon, etc.) are now within easy driving distance.

Glad to hear you're OK. Ohio can be rough in winters, just depends on how it goes.

And now you're closer to GaryCon and Chicago… just sayin'…

infocyde: The climate here already seems easier on my wife. Even the two days in the low 90s we had did not seem to bother her. The fact that it cools off at night (instead of dropping from 100 or so to the low 80s by the next morning) probably has something to do with it. The humidity is still high (IMO) but it is not bothering her — she hasn't even turned her dehumidifier on in her office area.

Good to hear you survived the trip, and that it seems Ohio is easier on you. Good to have you back, Randall. Virtual hug for your wife.

You've just made a horrible mistake. Once you come to Ohio, you can never leave! :p

I'm all the way on the other end of the state, so I'm afraid I won't be able to join. I should really free up some time and start running my own campaign at some point

I hope the new environment really helps with your wife's MS and you meet local friends quickly.

Glad to hear you're all well.