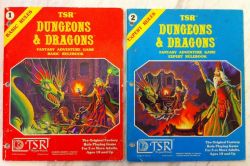 I’ve been working on Microlite74 and its many variants since 2008 During these nine years, I’ve produced:

That’s a lot of games from something that originally started as a quick project to do a small Microlite20 version of the original 1974 “0e” whose only intended purpose was to help people used to 3.x try “old school” play to see if they liked it. (Take a look at Microlite74 1.1 to see this version of the game.)

The only game I’ve published during this time that wasn’t somehow based on that original Microlite74, is Tarnhelm’s Terrible Tome which provides my “standard” house rules in a form suitable for the original 1974 game, Swords and Wizardry, Delving Deeper, and other versions of 0e. Tarnhelm’s Terrible Tome also includes a version of the Magic-User, the Mnemonic Mage, which uses a system closer the original magic system used in Jack Vance’s early Dying Earth stories.

You can view (and download) these games on RPGNow from this link — most are “Pay What You Want” (and free/$0 is fine if that’s what you want to pay).

While I have several Microlite75 variants I am supposedly working on, I’m not making a lot of progress. I suspect a large part of my very slow progress is that I am somewhat burned out on working with the Microlite74/75 systems. Like I said, I been working on Microlite7x/8x systems for nine years now. I’ve considered try taking a break and working on something not based on Microlite20/7x/8x rules before, but have never really done so because I did not have any others ideas that interested me enough to actually work on for more than a few days or weeks.

However, my post a few days ago “Creating a ‘Best of TSR D&D’ Rulebook” saw several people commenting that really like the B/X systems with the AD&D classes, spells, treasures, etc. and would really like a set of rules that combined the rules of Labyrinth Lord and its Advanced Edition Companion in one rulebook. As the vast majority of the text of both is Open Game Content under the OGL, this would be relatively easy to do. I suspect that only reason its never been done is because everyone likes Goblinoid Games and therefore no one wants to do step on their toes by publishing such a product. That’s certainly why I’ve never done it, even though I did a primitive combined version for my own use years ago.

Thinking about it, however, I realized that I would not feel about about publishing such a product if I added a lot of other material to it: optional rules, optional classes, optional monsters, optional treasures, optional spells, a domain system, etc. In other work the kind of optional extras I’ve added to my Microlite7x/8x games and have been writing seen I started to play OD&D back in 1975. Thinking some more about it, I noticed that I was actually interested and even excited about such a “BX Advanced” project. Excited enough, in fact, to start making notes and outlines of what I would need to do and ought to write. While I’m not 100% sure I want to do this, I’ve just about convinced myself that a BX Advanced of some type should be my next game design project.

What do you think?

It was your Microlites thatbrought me back to RPGS after an almost 20 year absence. I knew not of 3.0, 3.5, or 4, and didn't care. I wanted the game I knew and loved in the 1980s. And a few years ago when I found Labyrinth Lord and the Advanced companion, I found the game I played… that most people played. And now you want your shot to put your spin on it. I say great. Go for it. Maybe your flavor will taste a bit more natural to me, or someone else. But never think, for one moment, it is a waste of time.

I considered doing something like this myself a few years back (like seven or eight). At least reorganizing the B/X game (with certain additions) into a similar fashion as AD&D (a players manual, DM guide, etc.). But it fell way down on my priority list of projects because:

A) I couldn't decide on titles I liked.
B) I couldn't see how I could make it more interesting and/or useable than the books that already exist.

[also, I figured some of my other projects WOULD be more interesting to people likely to pay me]

In all honesty, I (now) think such a product would be a little redundant…and would probably not pursue it myself. HOWEVER, that doesn't mean it isn't worth doing. Just having a copy of your game of choice…all in a singular reference book…is a great idea (what I call "D&D Mine"). And I'm sure there ARE at least some folks who would like such a reference, whose preferred style of play is just what you're describing. But there may not be much of a market for it, unless you can really tart it up with some decent artwork and such.

That's what I think. Sorry if that's kind of a damper.

Think it's a wonderful idea and await the result!

As one of those people who wanted this in that post, I applaud you. Can't wait to see it.