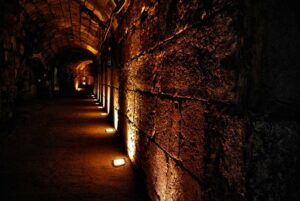 I stumbled across an article on a huge complex of man-made tunnels under parts of China that were apparently, like the Great Wall, built to help defend the Northern part of China from invaders.  From the article (click here to read the entire article):

These passages were apparently built around 1000 AD. Given the size of this tunnel complex and their apparent usage, perhaps megadungeons aren’t as an unrealistic idea as even those of us who enjoy them have assumed they were.