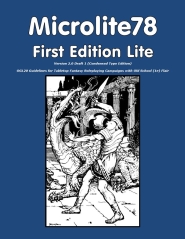 Microlite78 fan Robert has been at it again. While he was happy to see the digest/ebook version of Microlite78 First Edition Lite, he pointed out that i could do a version much closer to 1e now that I have more than the Microlite74 material to work with.

He’s right. The original mandate for Microlite78 was to combine the Microlite74 Extended rules with Microlite74 Companions II (Treasure), IV (Bestiary of Monsters), and V (First Edition Spells) into a single volume that could be used to play 1e style games — and to use the more standard XP and advancement system I was developing for Microlite81. The idea was that I could toss this together in a month or so. I agreed to do this a few days before my wife’s mother past away unexpectedly (and our move to Dallas), so my one month project ended up taking about a year.

Robert has convinced me to look at doing a second edition of Microlite78 First Edition Lite. In fact, I already have a fairly compete draft version available to RetroRoleplaying Cancer Fund donors (usual place, usual password — direct links: Draft 1 and now Draft 2). While there are not a lot of major changes, the changes made are significant:

The basic version of this game will be “pay what you want” and will not have a lot of art. There will be an Extended Version with more art and more monsters, treasure, etc for sale. The aim is to get these out by the end of summer — at the latest. Fingers crossed for no medical or family emergencies.