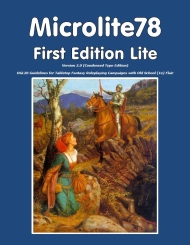 The second edition of Microlite78 first Edition Lite is available on RPGNow/DriveThruRPG in PDF for $7.50 — click here to go to the Microlite78 First edition Lite page on RPGNow (Or click here for DrivethruRPG). There will be a Pay-what-You-Want/Free version of these rules (without art) available in the near future.

The goal of Microlite78 First Edition Lite is do for First Edition (1e) what Microlite74 did for the Original Edition (0e): to recreate the style and feel of the First Edition of the world’s most popular fantasy roleplaying game published back in 1978 without giving up all of the clearer mechanics of modern D20-based versions.

This 236 page pdf contains the complete rules for the second edition of Microlite78 First Edition Lite, including:

The rules needed to create characters and actually play are short and sweet. Character creation rules (including race, class, alignment, and background descriptions) are 11 pages. Core rules (skills, saving throws, magic, combat, experience and level advancement) are 8 pages. They are written in fairly normal English, not “High Gygaxian”. The rules assume that the GM understands the basic concepts of roleplaying games, but provides information for both the GM and the players on the various “old school” styles of play. Microlite78 First Edition Lite games can easily use adventures and material from early editions of the world’s most popular tabletop fantasy roleplaying game or modern clones.

This is the second edition of Microlite78 First Edition Lite. Changes from the first edition:

* The Barbarian and Bard classes added.
* The method of determining the number of experience points needed to advance no longer requires recalculating entire experience point advancement charts if optional rules are used.
* The treasure section is more like the first edition of the world’s most popular roleplaying game which makes the game easier to use with published adventures.
* Rules for character-ruled dominions are included.
* Gamemaster section with advice for creating and running campaigns added.
* Some artwork is in color.