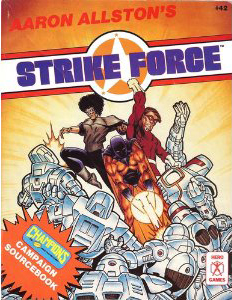 I found my copy of Aaron Allston’s Strike Force in a box a few weeks ago. I hadn’t read it since in came out in 1988 so I set it aside to re-read. Reading it reminded of how much I enjoyed running Champions games back in the early 1980s. I read Aaron’s review of the first edition of Champions in The Space Gamer and had to have a copy. Fortunately, I had a couple of friends who were selling comics at the Eisenhauer Road Flea Market (a few blocks from my house) who went up to a distributor in Austin every Friday to get the weeks comics. I asked them to see if their distributor had a copy of Champions and get one for me if they did. I was sick with something flu-like that Friday, but I dragged myself down to their stall to await their arrival. They came back with 56 page rulebook, sold it to me and sent me home cause they did not want whatever I had.

While I had some issues with the rules, I was soon running Champions games in addition to my ongoing Empire of Arn (a homebrew fantasy game). I bought everything for 1st edition, then for second edition, and for third Edition — although by then Marvel Superheroes (FASERIP) had become by standard superhero game as Champions was going more and more complex. I remember purchasing the fourth edition of Champions — a 350 page hardback book — and thinking I could use it as a weapon. I read the book, decided Champions had become far more detailed and complex than I was interested in, put the book on the shelf and I don’t think I ever played or ran Champions again. By that point in my gaming “career” I was coming to the conclusion that more complex and detailed made most RPGs worse instead of better — even my own Empire of Arn homebrew seemed more complicated than it really needed to be and I started rolling it back toward a B/X D&D complexity level. I kept all my Champions stuff (of course) but other than my third edition rules books, everything was in boxes.

Back to the present, having found my copy of Strike Force, I was reading it when players started arrived for my Sunday game a few weeks ago. One of my players saw it and got very excited as he had never seen a copy. I didn’t know he had any interesting in Champions. It turns out he had purchased the sixth edition rules when they came out 8-9 years ago hoping to either run or play in it but never found a game. To show you how out of touch I with Champions am, I didn’t even know there was a sixth edition. We went on with the Sunday game but there was a lot of Champions discussion on our mailing list that week

The next Sunday, Paul brought his sixth edition books so I (and others) could look at them. My eyes nearly popped out of my head when I saw that there were three books need to play — Hero System Rules Volume I, Hero System Rules Volume II and Champions 6e and they totaled just short of 1100 pages. My comment was that I could see why he never found a game as no one who wasn’t already a Hero system expert would be likely to be willing to even try to play in a game — let alone run a game. I could tell there was a lot of interest in a superhero game (and they really wanted it to be Champions, unfortunately), so I offered to run a monthly session of Champions 3rd edition — under 150 pages of rules. Given that I was the only person with a copy of those rules, that was a non-starter. Side Note: This is one of the reasons I prefer games where players don’t really need a copy ofd the rules to play.

Middle of last week I got an email from Paul. He had checked RPGNow to see if Hero Games was selling the third edition rules. They were not. However, they now sell something called Champions Complete. This supposedly has all the rules (i.e., it’s a complete game, not an addon that needs the 700+ page Hero System 6e rules books) in about 250 pages. Does anyone have any comments on Champions Complete 6e? It’s still over 100 pages longer than Champions 3e, but I might be able to live with it — although I’d really rather run some like FASERIP as it is a far less annoying system than the Hero System (IMHO).