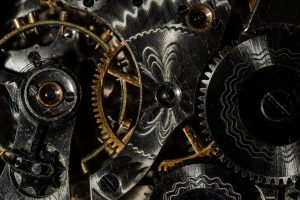 I posted about the nearly five year long campaign I ran in Waco (and that is still going under new GMs) recently on a forum. I received an a PM asking how I could run a game that used basically OD&D rules (filtered through Microlite74) for over 150 sessions without being bored by the simple and uninteresting mechanics.

The answer is pretty simple. I am not interested in the mechanics as mechanics. I want the mechanics to work and to be simple, easy to remember and easy to use so that they fade into the background. I don’t play tabletop RPGs because I want to fiddle with mechanical rules toys. I play (and run) tabletop RPGs to explore settings, situations, characters. When I’m playing, I want to immerse in my character and “manipulate” the setting as my character as directly as possible. That is, I don’t want to have to decide I want to do “X” in the campaign and then have to worry about how to use the rules toys and widgets to do “X”. I want the rules to be simple enough that I can just say what I want to do without using “rulespeak” and the GM can tell me if what I want to do is a success, a failure, or what I need to roll to find out. I don’t want a lot of “interesting in and of themselves” mechanics to come between me and the setting.

Since I’m not playing RPGs to interact with the rules/mechanics, I tend not to get bored with game systems that work for me. If the system lets me immerse in my character and interact with the world without having to deal with fiddly mechanics, I’m going to be as happy with the mechanics in the 150th session as I am in the first session. New mechanics may (or may not) have to be added along the way for new aspects of the campaign, but I’m not going to get bored with the rules because I’ve been using them for years. I’m simply not there playing for the rules but for the setting.

I understand that some players play because they enjoy mastering rules and finding ways to manipulate the mechanical widgets in the rules. I can understand how such players might get bored with their current rule set and want new and different rules fairly frequently. I’m pretty such that such players drive the current practice of a new edition of D&D with radically different rules every five years or so. However, new editions with completely different rules turn me off, so I stick with rules that have worked for me for many years because they do what I need them to do. I see no personal need for new rules when the old ones I do the job I need them to do.