↓
Home→Gates & Glamours→OD&D PDFS: What Do You Really Need to Play? 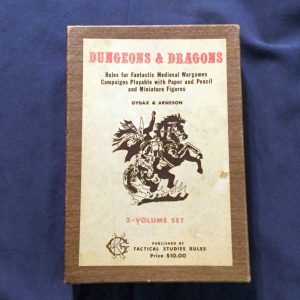 Original D&D from the mid-1970s has finally been released in PDF form on DrivethruRPG/RPGNow. As most readers of this blog know, I started playing D&D back in 1975. OD&D was my first RPG and is still one of my favorites today. This is a short post with my suggestions for what you need to buy to play OD&D and what additional items might be nice to have.

The only rulebooks you really need to have a copy of to play are the three little booklets originally sold as a boxed set: Dungeons & Dragons Original Edition (0e). This is a scan of the sixth printing rules as cleaned up for WOTC’s expensive Collector’s Edition in the wooden box.

While playing with just the three little booklets is popular in some old school circles today, back in the 1970s, most people played with material from the OD&D supplements TSR published. Everyone I knew or played with in the 1970s at least used material from the first supplement, Greyhawk. For example, Greyhawk added the thief class, different hit die sizes for the various classes and weapons, expanded options for non-human classes, added lots or new spells, monsters, and magic items, and more. Even if you elect not to use everything, you really need this book to understand how OD&D was usually played back in the mid-1970s.

The second supplement, Blackmoor, is a mixed bag. It adds the assassin and the monk classes, hit locations (which no one I knew actually used), underwater adverting rules and monsters, rules for specialists and disease, and a few other minor things. The star of the Blackmoor supplement, however, was the detailed writeup of one of the adventure locations for the Blackmoor campaign: the Temple of the Frog. This was the first complete example of a dungeon that most player and GM of the time ever saw. Is this supplement necessary for play? Unless you want to do underwater adventuring or add the assassin and monk classes, probably not.

The third supplement, Eldritch Wizardry, is one of my personal favorites. The psionic rules therein allowed me to play in a setting I had been creating for a novel I wanted to write since the late 1960s — the Empire of Arn. The novel never did happen — be thankful as I can’t write fiction worth reading. The Empire of Arn setting, however, has been by go to setting for D&D — used in about 60% of the campaigns I’ve ran over the years. In addition to the psionics rules (which most people consider unplayable at best and incomprehensible at worst), there are rules and spells for the Druid class, some new monsters (including demons), and rules for magic items of great power: artifacts and relics. Like Blackmoor, however, this supplement is only needed if you need some of the material in it.

The fourth supplement, Gods, Demigods, and Heroes, contains brief descriptions of deities from a number of pantheons, with a few magic items used by those deities. This fourth and final supplement isn’t all that useful. It was written in part to counter the “California” style of play with its ultra-high level characters. From the forward: “This is our last attempt to delineate the absurdity of 40+ level characters. When Odin, the All-Father has only(?) 300 hit points, who can take a 44th level Lord seriously?” It failed, as most people who really used this supplement were the “California” style players and GMs who just treated the deities in this supplement as powerful monsters to try to defeat and take their stuff. It can be fun to read, but is probably the least necessary to have of all the OD&D supplements.

TSR did not actually publish any adventures for OD&D. The original version of B1-In Search of the Unknown and B2-The Keep on the Borderlands were included in the Holmes Basic Set (B1 in early printings, B2 in later printings). Unlike the Basic D&D sets of the 1980s, the Holmes Basic set was intended to be an introduction to OD&D. Therefore these two modules work quite well with OD&D. I’ve often used both to start a campaign: starting at the Keep but placing the B1 dungeon nearby and planting a few treasure maps leading to it in the B2’s Caves of Chaos. Both these modules give a lot of good GMing advice.

I strongly recommend one third party product from Judges Guild to all OD&D GMs: the Ready Ref Sheets. This is a booklet with copies of the combat tables from OD&D/Greyhawk, quick monsters lists and lots of useful random tables from early Judges Guild products: character social levels, poison types, metal and gem types, civilization and technological levels, non-player character cutups, construction and research guides, movement obstacles and wilderness terrain, beggars, shock recovery, crime and punishment, guards and garrison troops, resurrection results, special encounters, and more. I use my hardcopy from 1978 in games I run today. It’s one of the useful third party supplements I’ve ever purchased.

Judges Guild also published a number of adventures for OD&D. They are a mixed bag that I hope to cover in a future post. However, I have gotten a lot of use out of City State of the Invincible Overlord, Wilderlands of High Fantasy (note, you need to buy the maps separately), The Book of Treasure Maps I, Modron, Castle Book I, and Village Book I. Unfortunately, many of the other JG OD&D products I like aren’t available in PDF — at least not in their OD&D forms. The Caverns Of Thracia module is available in an edition rewritten for 3.x, but the original version is much easier to use with OD&D.

Finally, you might want to consider picking up All the Worlds’ Monsters. This is a three volume collection of monsters written by many different GMs published in the 1978s by Chaosium. The monsters are a varied bag and are of all power levels. The first and second volumes are better, at least in my opinion, than the third volume. However, I have used monsters from all three volumes over the years. Some of these monsters are completely original, others are adapted from folklore and literature.